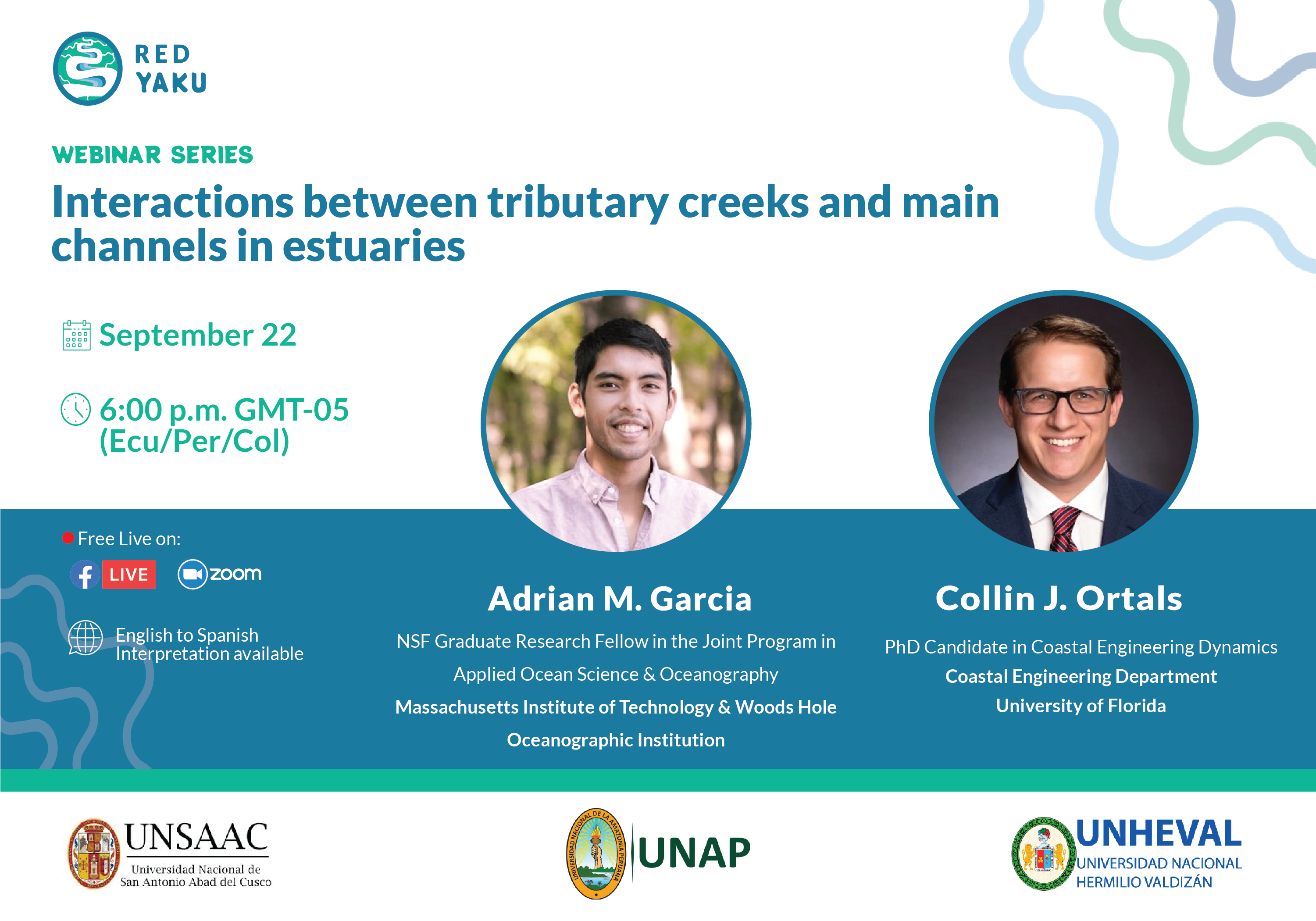 This month we present the webinar “Interactions between tributary creeks and main channels in estuaries”, given by Adrian Garcia and Collin Ortals.

We present results from two separate field studies investigating the interactions between tributary creeks and the main channel in tidal marsh creek networks. In one study, a field study using moorings, shipboard measurements, and drone surveys were conducted to characterize and quantify the dispersion due to the exchange process between the main channel of an estuary and its tributary creeks. This oscillatory exchange mechanism – often called tidal trapping – contributes to dispersion because of the tidal phase difference in currents between the main channel and the creeks, and this phase difference can be enhanced by density-driven flows in the creeks. The impact of this exchange process on the salinity structure of the main channel is examined and a dispersion rate due to the trapping mechanism is calculated empirically from the field measurements. Notably, this dispersion rate is larger than theoretical estimates that neglect the role of the exchange flow and the resulting stratification in the creeks.

In the second study, acoustic Doppler velocimeters, pressure sensors, and water pumps were deployed in three intertidal creeks within a confined marsh drainage basin to understand the flow and transport patterns within a contiguous marsh segment. These intertidal creeks terminate in the marsh platform where there is strong heterogeneity in both plant and animal types and abundances. Field data revealed that within the confined basin, the tidal and suspended sediment transport varied in both directionalities (i.e. flood or ebb dominant) and in magnitude between creeks, which depended on tidal amplitude. Estimates of drag in the creeks revealed a similar stage-drag pattern within creeks, where the effective drag (i.e. drag from landscape, vegetation, and ‘integrated’ effects) exceeded the bed drag by 3-12 times depending on tidal stage and phase. Together, these findings suggest that the main channel flow patterns may exert more influence on the intertidal creek flows. The consequence of this important coupling can lead to heterogeneity in the spatial and vertical evolution of marshes that are not typically captured in long-term marsh evolution models.

About the Keynote Speakers

Adrian is an NSF Graduate Research Fellow in the MIT-WHOI Joint Program with a research focus on Environmental Fluid Mechanics in the coastal zone. Prior to starting his PhD, he completed his undergraduate studies at the University of Pittsburgh where he studied Civil Engineering and graduated summa cum laude. In his thesis research, he uses a combination of field measurements and numerical modelling to study the role of topographic features on hydrodynamics and circulation in estuaries. At MIT, Adrian has served as director the MIT Water Summit in 2019, which explored the impacts of plastics in the water environment, and he is currently on the planning committee for this year’s Summit, which focuses on the resiliency of coastal cities and ecosystems. Adrian aims to understand environmental processes and dynamics, particularly as they relate to sustainable management of the coastal ocean. By linking physical mechanisms to biological and geochemical processes, he ultimately seeks to contribute towards coastal sustainability and restoration efforts with a focus on nature-based solutions. Additionally, Adrian is passionate about improving STEM representation and access to historically excluded groups through mentorship and educational outreach.

Collin is a Ph.D. candidate in the Coastal Engineering department at the University of Florida with a research emphasis on the geospatial evolution of salt marshes and the spatial distribution and abundances of plants and animals within. Collin graduated from the University of Pittsburgh in 2016 with a B.S. in Civil Engineering. Following his graduation, he worked in the private sector for two years, working on large-scale marsh restoration projects in coastal Louisiana and developing coastal flood hazard maps in Florida. For his doctoral work, Collin has been working on an interdisciplinary team consisting of engineers, ecologists, and geologists, to understand the relationship between ecosystem engineers (i.e. Sesarma reticulatum (purple marsh crabs) and marsh flow patterns. Currently, long-term simulations of marshes worldwide are carried out to understand if marshes will persist under increased sea level rise and other changes in the climate (i.e. increased or decreased precipitation). However, ecosystem engineering effects have not been integrated into these hydrodynamic models despite their potential to alter the trajectory of the marsh.

About the Webinar Series